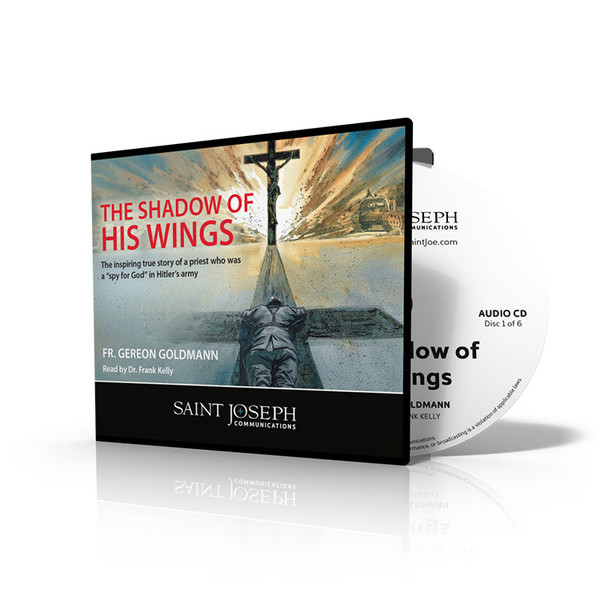 Now on CD!  The Inspiring True Story of a Priest who was a “Spy for God” in Hitler’s Army!

In the early 1960s, Fr. Gereron Karl Goldmann, a Franciscan stationed in Tokyo, felt moved by the Spirit to write his autobiography. Who was this Father Goldmann, that the Japanese people knew only as a saintly priest? He was a former officer in Hitler’s personal military force, the dreaded SS! And therein lies a story you don’t want to miss.

Powerful Testimony
After it’s publication in 1962, Fr. Goldmann’s autobiography became a Catholic Classic. Out of print for many years, Shadow of His Wings is a powerful testimony to the providence of God, the power of prayer, and the courage that comes from fidelity to the sacramental life. It is also a breath-taking adventure story.

Fr. Goldmann’s war experience spans the map of Europe during WWII, from Paris to Poland to the hellish Russian front. Though each ordeal was more brutal than the last, he remained rooted in his Catholic convictions, proclaiming the Faith to his Nazi countrymen with a bravery that could only come from heaven.

“Web of Grace”
Father’s story imparts the importance of the proper formation of children. Goldmann’s father was a devout Catholic who continually taught him, “Always protect the little and the weak.” Gereron never forgot this, especially when showing mercy to suffering children as an invading German soldier.

Shadow also reveals how persistent prayer forms a “web of grace” that binds together the body of Christ. A powerful example is Sister Solana, his childhood mentor. She secretly began praying for him daily to become a priest, offering her every sacrifice for this cause for twenty years. And how her prayer worked! Gereron was ordained exactly twenty years later, though he was still a German soldier and had not finished seminary!

Do the Right Thing
From his devotion to the Eucharist and his childhood pledge to “do the right thing” despite all opposition. Gereron Goldmann received the wisdom to discern God’s Will—and the courage to carry it out. This was especially so when he was banished to the North African prison camps.

In these places “where Nazism reigned supreme”, Gereron constructed chapels, preached 2000 sermons, started a school of theology and even began Eucharistic adoration! A powerful testimony of God’s providence and a thrilling true-life adventure, Shadow of His Wings makes a great gift, order today!

How God’s providence protects those who “follow where He leads”
How SS leader Heinrich Himmler himself, granted Goldmann permission to practice his faith
How enduring prayer effects future events
How Gereron’s purity was protected from the outrageous command to “procreate for the Fatherland”
How “doing the right thing” overcomes all opposition
Why Christian love knows no national boundaries
How Gereron was assigned to Lourdes and Rome in fulfillment of Sister Solana’s prophecy
How he escaped execution after being caught in the plot to assassinate Hitler
How “God is more powerful than war”

Christ in His Fullness

The Shadow Of His Wings (Digital)

An Exorcist Tells His Story

Mother Angelica on God, His Home, and His Angels

The Shadow Of His Wings (Digital)

Acts of the Apostles (All 4 Volumes)