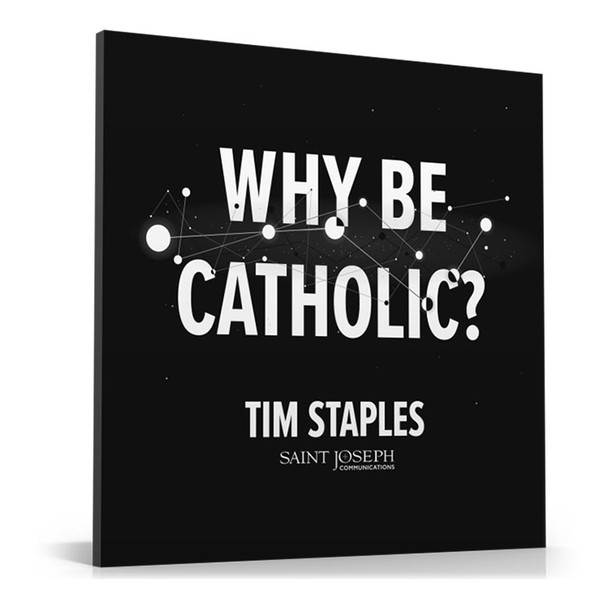 While in the Marine Corps, Tim Staples met a Marine who really knew his Catholic faith and challenged Tim to study it from Catholic and historical sources. Tim was determined to prove Catholicism wrong, but he ended up studying his way into the last place he thought he would ever end up: the Catholic Church. In this full-length talk, Tim presents a powerful, information-packed primer on the Catholic faith, dealing with topics such as the scientific and philosophical proofs for the existence of God and why even non-Catholic sources show why the Catholic Church is the one true Church.

- Tim Staples, from Why Be Catholic

Tim Staples was a Southern Baptist in the Marine Corps when he met a Marine who really knew his Catholic faith. Determined to prove Catholicism wrong, Tim ended up studying his way into the Church! After his conversion to Catholicism, Tim started formation for the priesthood, earned a degree in philosophy from St. Charles Borromeo Seminary, and studied graduate level theology at Mount St. Mary’s Seminary. Realizing that his calling was not to the priesthood, Tim left the seminary in 1994 and has been working in Catholic apologetics and evangelization ever since. He currently serves as Director of Apologetics and Evangelization at Catholic Answers.

Praise for Why Be Catholic?

“This talk opened my eyes to how science and faith work together to paint a beautiful picture of God’s universe.”

The Catholic Girl's Survival Guide for the Single Years

Why A Protestant Pastor Became Catholic

The Four Signs of a Dynamic Catholic (Single Book)

Why Be Catholic? - Single CD (Digital)

All Generations Shall Call Me Blessed

The End: A Study of the Book of Revelation

The Discerning Priest: Ignatian Wisdom for Daily Life in Priesthood