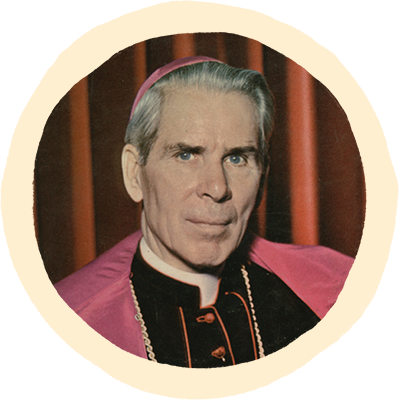 Venerable Fulton J. Sheen
Venerable Fulton J. Sheen was an American bishop, a prolific author, and a popular radio and television personality. He hosted “Life is Worth Living” on the Dumont and ABC television networks from 1952-1957, and “The Fulton Sheen Program,” a revival of his earlier program, which ran in syndication from 1961-1968. In 1979 Fulton John Sheen received his greatest accolade when Pope John Paul II embraced him at St. Patrick’s Cathedral in New York City. The Holy Father said to him, “You have written and spoken well of the Lord Jesus. You are a loyal son of the Church.” Fulton Sheen passed into eternal life just two months later on December 9, 1979. His charismatic style and common sense approach to modern-day topics captivated the country, drawing millions of viewers each week, the majority of whom were not even Catholic.