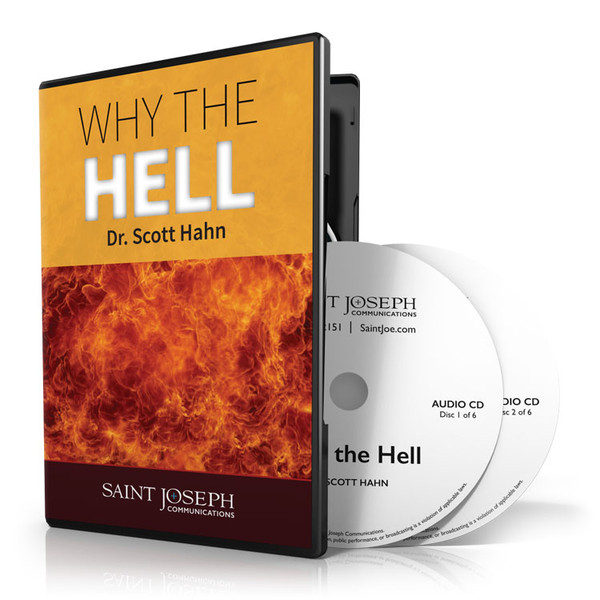 Even in the midst of all this confusion and corruption, we may still wonder: Why would a merciful God maintain a hell? Who’s going to hell? Might hell be empty? Could I (or someone I love) really end up there? We all have a lot riding on those questions, but in order to get answers, we must get behind the questions. We need to address the mystery of sin—its causes, consequences, and cure. That’s precisely what best-selling Catholic author Dr. Scott Hahn does in this digitally re-mastered series.

Produced on 6 CDs, you’ll listen and learn what the Scriptures say about how hell began; why it continues even after Christ‘s triumph; how even the high angel, Lucifer, could fall into sin and drag us down with him; how Adam and Eve “dis-graced” us through Original Sin; and how Jesus and Mary—the New Adam and the New Eve—can lead us infallibly to heaven.

A Battle You Can’t Miss
On disc number one—Sex, Lies, and Sacraments— you’ll discover how hell has worked its way into many families and answer the question, “Is your family prepared to resist it?” Disc two—Why the Hell?—reveals the shocking things Scripture has to say about hell. Too many sell these passages short—don’t miss the real meaning! The third disc—Original Sin—explores the biblical book of Genesis to discover how things in this world got so messed up.

Also in this series, Scott reveals what we know about the wicked angels, and explores how a good angel could go bad. Explaining why sin must be dealt with at its source, Dr. Hahn looks to Romans, Chapter 5 to answer who can do it. The final CD unpacks Revelation twelve to reveal that just as Satan took on the first Eve, so God created a second Eve to wipe out “that ancient serpent.” This is a battle you can’t afford to miss, because the fighting is mighty close to home!

Scott Hahn’s masterful explication of the mystery of sin (and what you can do about it) is a must for all Catholics who desire to be able to grasp this essential concept and also to relate it to others before its too late! The Bible has plenty to say about hell, and none of it is very pleasant. One thing is very clear: hell is too close to us for comfort. So order today and begin the lifelong work of “getting the hell out of here!”

Discs in This Series

(Disc 1) Sex, Lies, and Sacraments - How hell has worked its way into many families. Is your family prepared to resist it?

(Disc 2) Why the Hell? - The Scriptures have some shocking things to say about hell. Don’t miss the real meaning. Don’t sell these passages short.

(Disc 3) Original Sin - How in hell did the world get so messed up? Is there any truth to Genesis?

(Disc 4) Why the Devil? - What do we know about the bad angels? How could an angel go bad?

(Disc 6) The New Eve (Rev. 12) - Just as Satan took on the first Eve, so God created a second Eve to wipe out the monster. This is a battle you don’t want to miss, because the fighting is mighty close to home.

Why Be Catholic? - Single CD (Digital)

The Book of Hebrews: House Of The Rising Son (Digital)

Genesis 1-22: The Covenant As a Family Affair (Digital)

Encountering Christ In The Gospels (Digital)

Faith Works: A Bible Study On The Letter Of Saint James (Digital)