In Via || Miraculous Medal - Handcrafted with 22in Steel Rope Chain 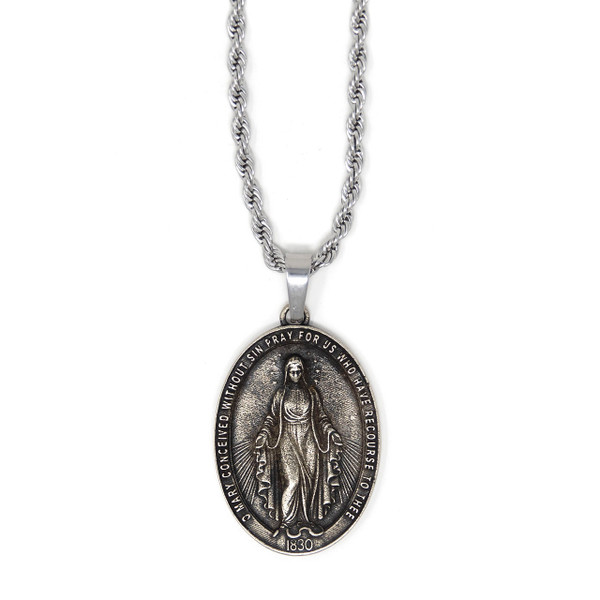 In Via || Miraculous Medal - Handcrafted with 22in Steel Rope Chain

The Medal that Changed the World

In 1830, the Blessed Mother appeared to St. Catherine Labouré and petioned her to have a special medal created for those who would like to place themselves under Her mantel of protection. This medal was originally called the Medal of the Immaculate Conception, but, because of the numerous accounts of miracles by those who wore it, people began to call it the Miraculous Medal, and the name stuck. With approval of the Catholic Church, the first medals were made in 1832 and distributed in Paris. Almost immediately, the blessings that Mary promised showered down on those who wore her medal, and soon all of France was clamoring for what the people referred to as the “Miraculous Medal.” Use of the Medal spread from country to country, and, at the time of St. Catherine’s death in 1876, more than a billion medals had been made.

The front side of the Miraculous Medal depicts Mary Immaculate, her hands open, full of light. St. Catherine Labouré saw Our Lady appear like this and heard her say, “Have a medal made according to this model. Everyone who wears it around their neck will receive great graces.” Mary stands upon the globe as the Queen of Heaven and Earth. Her feet crush the serpent to proclaim that Satan and all his followers are helpless before her (Gn. 3:15). The year 1830 on the Miraculous Medal is the year the Blessed Mother gave the design of the Miraculous Medal to St. Catherine. The reference to “Mary conceived without sin” supports the dogma of the Immaculate Conception of Mary — referring to Mary being sinless, “full of grace,” and “blessed among women” (Lk. 1:28). The dogma of the Immaculate Conception was proclaimed 24 years later in 1854, and then confirmed when Mary appeared to St. Bernadette Soubirous in Lourdes, France, in 1858.

On the reverse side, the Cross and the letter M symbolize the close relationship of Mary to the suffering, passion, and death of her Son. The cross can symbolize Christ and our redemption, with the bar under the cross a sign of the earth and the Altar, for it is on the Altar at Mass that the Sacrifice of Calvary continues to be present in the world today. The M signifies “Mary” and “Mother.” The interweaving of Mary’s initial and the cross shows Mary’s close involvement with Jesus and our world. In this, we see Mary’s part in our salvation and her role as Mother of the Church. Beneath the Cross, bar, and the M are two hearts side‐by‐side: the Sacred Heart of Jesus crowned with thorns and the Immaculate Heart of Mary pierced by a sword. The two hearts represent the love of Jesus and Mary for us.

The twelve stars signify the twelve tribes of Israel and the twelve apostles, who represent the entire Church as it surrounds Mary. They also recall the vision of Saint John, writer of the Book of Revelation (12:1), in which “a great sign appeared in heaven, a woman clothed with the sun, and the moon under her feet, and on her head a crown of 12 stars.”

The Mission of In Via

In Via rosaries and pendants are hand-designed and cast in a variety of metals in the USA.   In Via’s founder, Christian J.L., worked with several master jewelers across the U.S. before narrowing it down to one craftsman who could capture the intricate detail of his designs. We’re proud to offer them as a premium rosary option, one that reflects the beauty of Christ and Our Lady.

We believe in the power of high-quality prayer items to bring intentionality to our lives. But the story of In Via is what really touched our hearts. Christian has made it his mission to personally deliver durable paracord rosaries to the homeless people in his area who need them.

For every prayer piece you purchase, Christian gives one paracord rosary away. With your purchase, you participate in a beautiful mission to wrap the poor in Our Lady’s comfort.

In Via || Scapular Medal - Handcrafted with 22in Steel Rope Chain

In Via || Scapular Medal - Handcrafted with 22in Steel Rope Chain

In Via || "Terror of Demons" Rosary - Black Stainless Steel - 5 Decade

In Via || "Terror of Demons" Rosary - Gold Stainless Steel - 5 Decade

In Via || "Terror of Demons" Rosary - Stainless Steel - 5 Decade